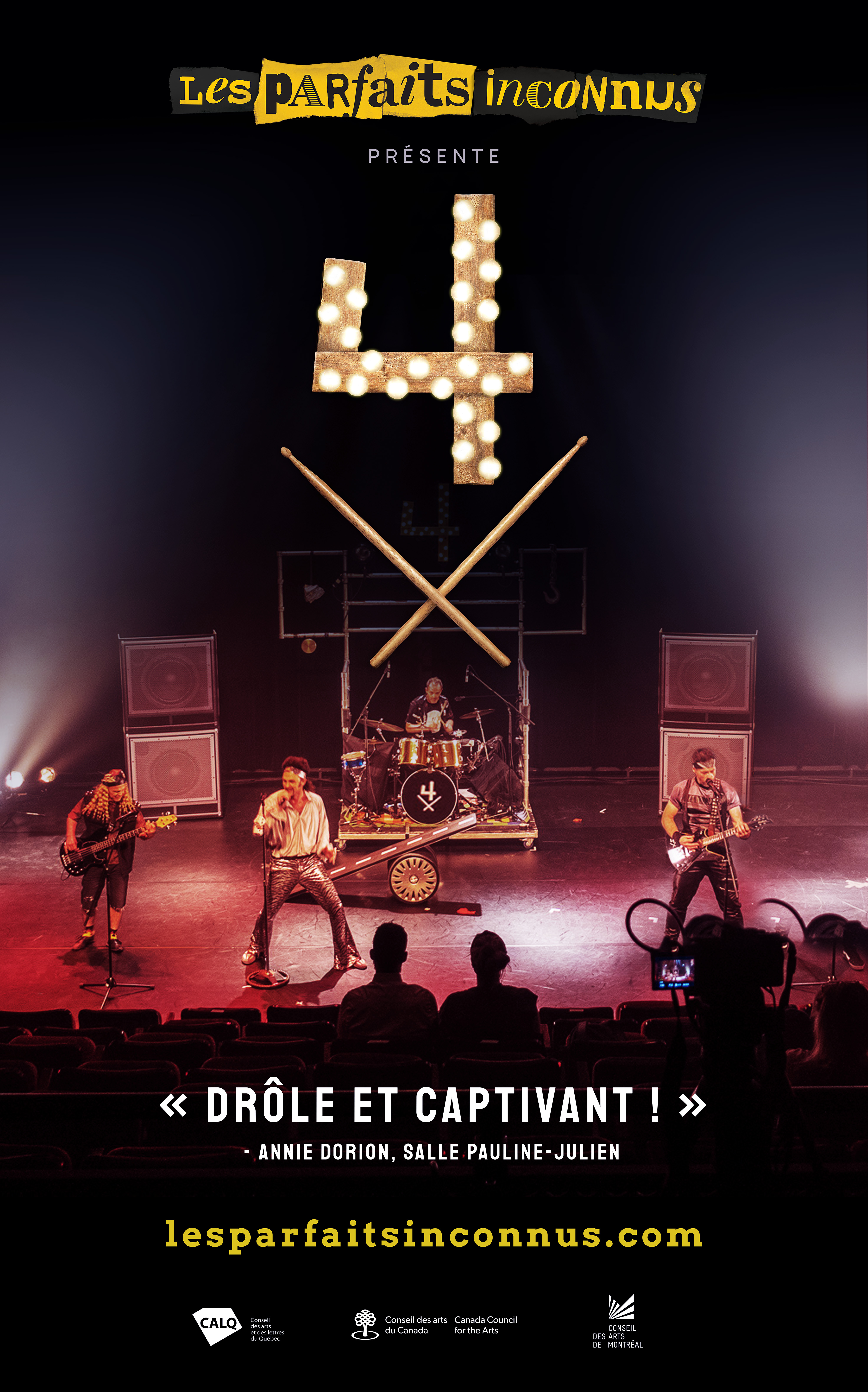 Public
For all
Duration
65 minutes

After travelling the globe with their last three shows, Les Parfaits Inconnus are emerging from the pandemic with « 4 », a brand-new production.

Known for its wacky, creative, devil-may-care spirit, the troupe is taking a more musical and theatrical turn in order to reach new markets. 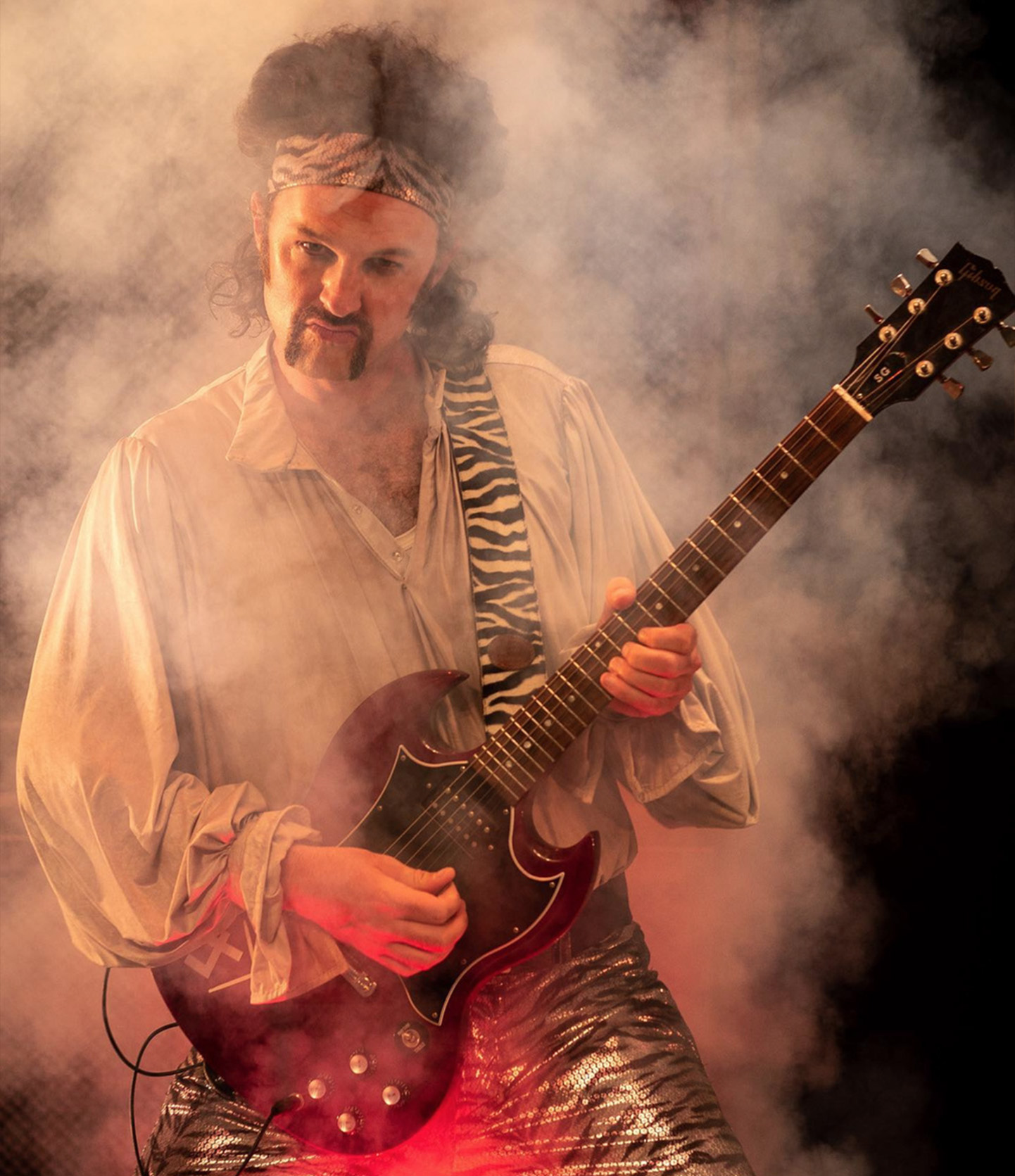 In  « 4 », Philibert is #1. He’s the lead singer, as they say in the world of rock. He’s a narcissistic artist who is concerned… only for himself! He also plays guitar, keyboards and saxophone.

Philibert is a self-taught artist whose parents are clowns. When he was young, he studied at F.A.C.E. (in the Fine Arts program) and began performing at age 12. He completed his training by doing several clowning workshops and training programs with recognized instructors including Michel Dallaire, Yves Dagenais, Luc Senay, Massimo Agostinelli, Soizick Hébert and Johnny Filion. Over the years, he has worked with various renowned companies, among them Cirque du Soleil, Cirque Éloize, Circus Monti (Switzerland), Théâtre de l’Aubergine, Cirque Akya and… Les Parfaits Inconnus! 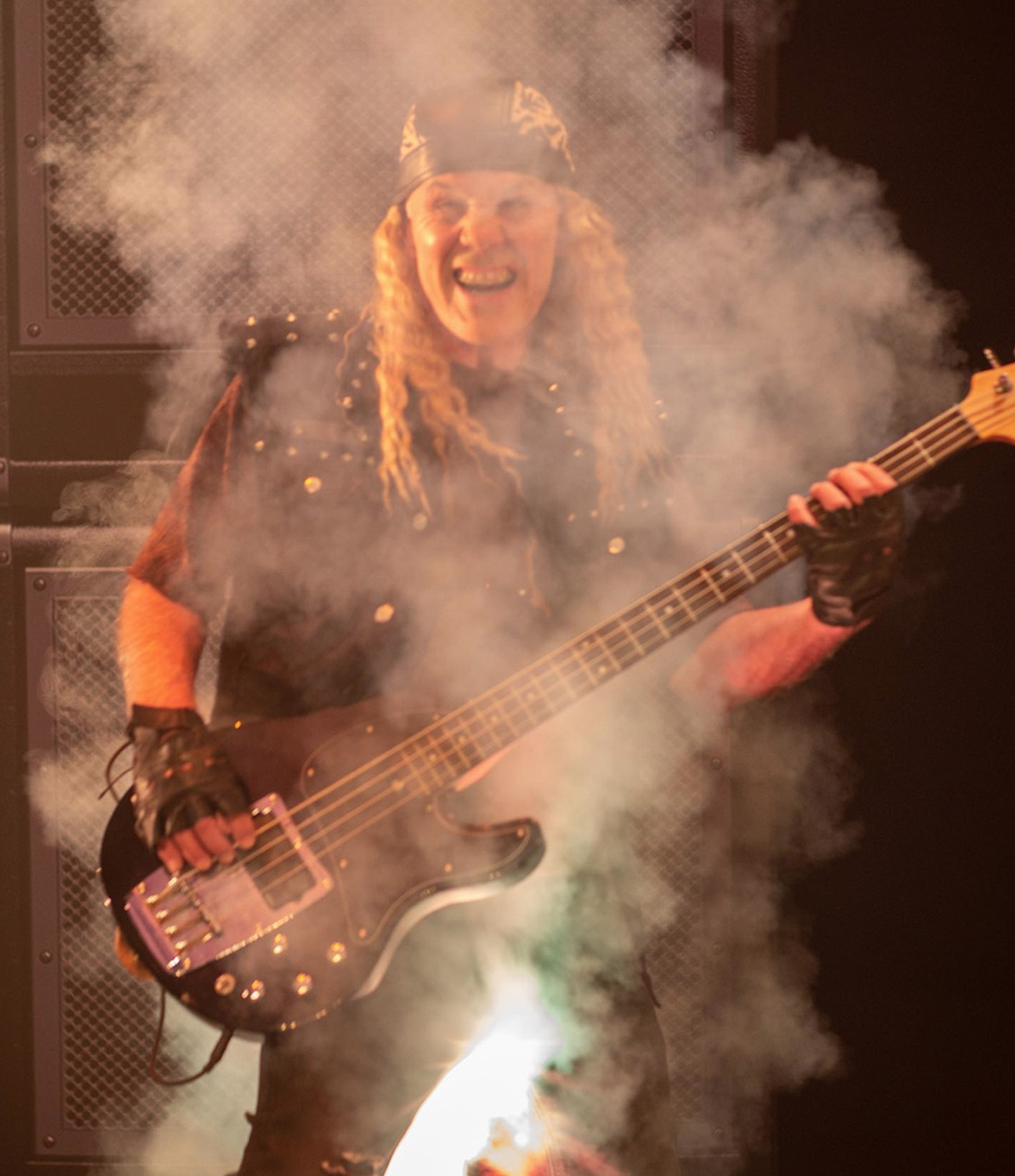 In « 4 », Sylvain is #2. He founded the band in 1972 and plays bass in it. He is also a very emotional person who, in daily life, conceals his emotions, revealing them only through his acrobatic bike!

A graduate of the École Nationale de Cirque de Montréal (1994) and an acrobatic bike expert, Sylvain has been on the road for 30 years. In solo shows or for several major circus companies, he appears around the world, from Montréal to Sydney, via Paris, Hong Kong, Bogota, London and Seoul. Over the years, he has taken part in many international festivals as well as several TV shows in Canada, the U.S. and Korea.

In 2005, he founded his own circus company, Les Parfaits Inconnus. It is with great pride that he helps to develop and act in each of the company’s shows. 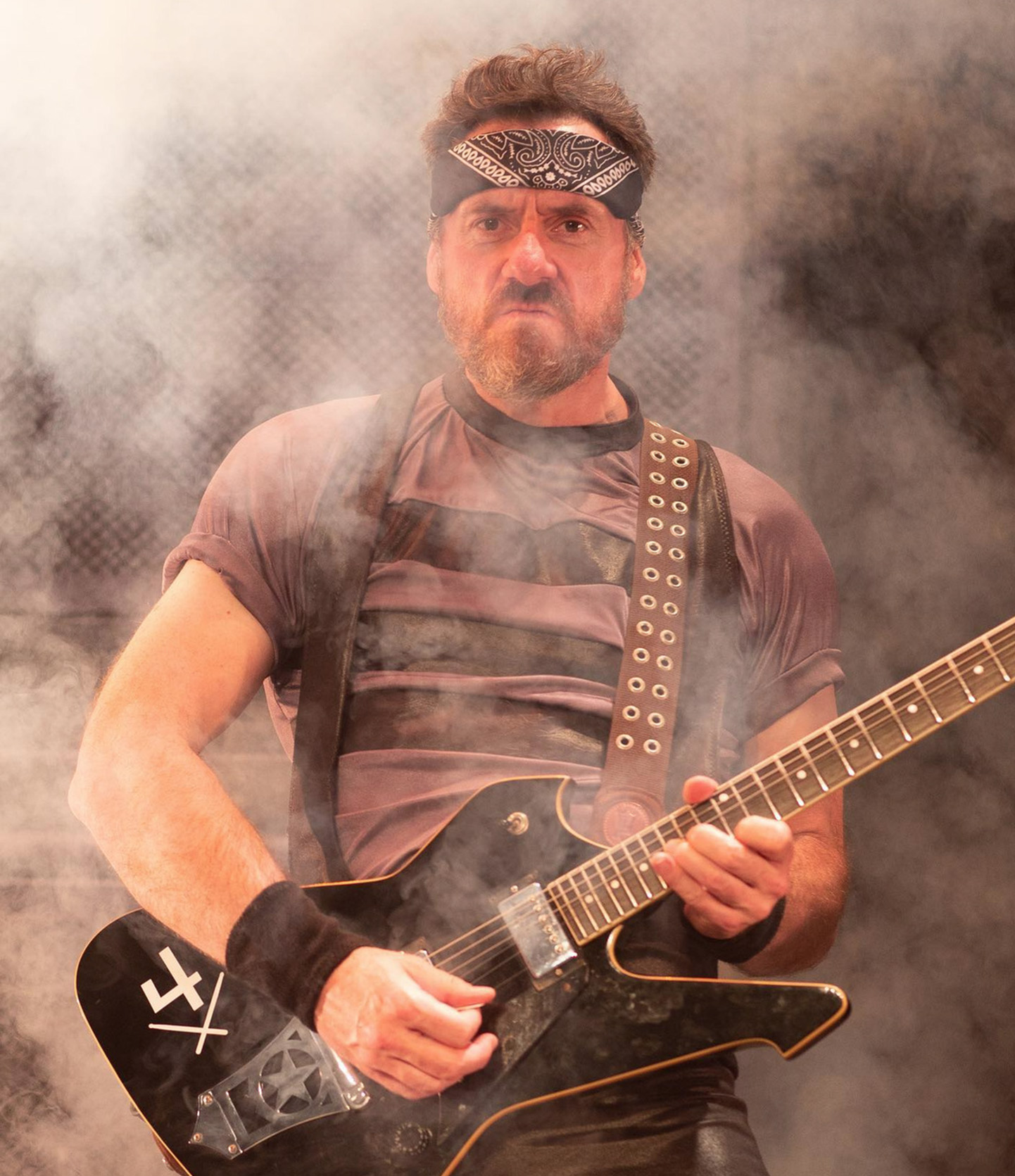 In « 4 », Pat is #3. He’s a virtuoso guitar player, but he isn’t too bright! He is strong-willed. And he says yes to everything! He is in awe of his sidekick and childhood friend, #1.

In 2008, when Patrick, an accomplished guitarist since his teen years, brought Les Parfaits Inconnus together for their first production, it was only by chance. How could he have imagined that his career as a rock guitarist and entrepreneur would one day allow him to be part of a circus troupe and travel the world clowning?

Patrick is also cofounder of Musicopratik music studio and the founder of Immersion Rock Montréal music school and of HeartRockCoeur music school in Verdun. As well, he is very involved in the cultural development of his neighbourhood. 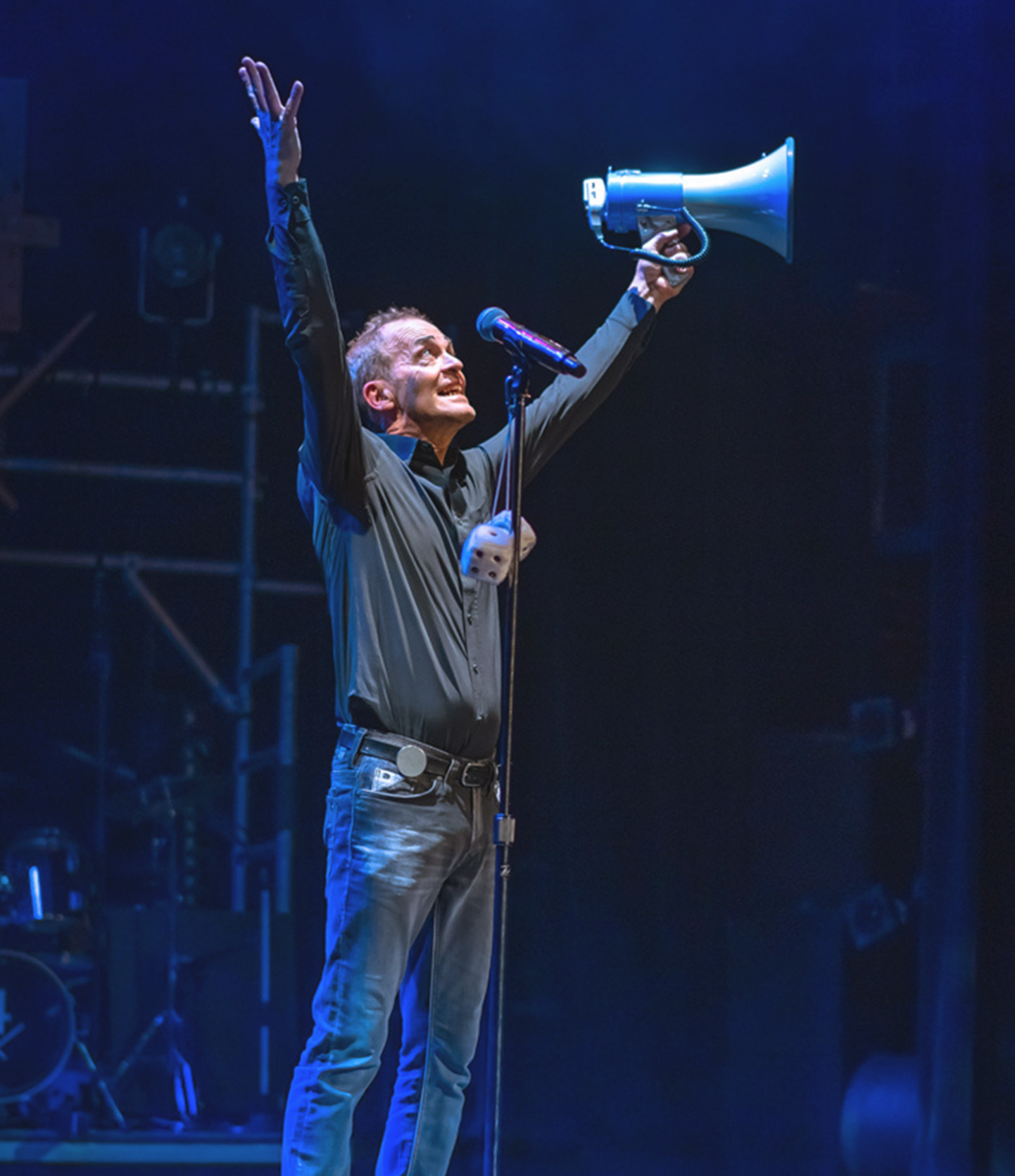 In « 4 », Johnny is the roadie. From the beginning, he has faithfully travelled with the band when they’re on tour. Although he works behind the scenes, he dreams… of becoming #4! The roadie is also a very silly and clownish character who can tell us stories about the touring years with what he finds in his road case!

Johnny Filion has more than 40 years’ experience in the entertainment industry around the world. Over time, he has developed his own unique approach to physical comedy, combining music, magic and circus arts. He is a virtuoso when it comes to comic timing and zany behaviour that manages to impress us whether he is juggling, spinning plates or playing with just about anything. He is also a fantastic musician and expresses his imagination through the drums.